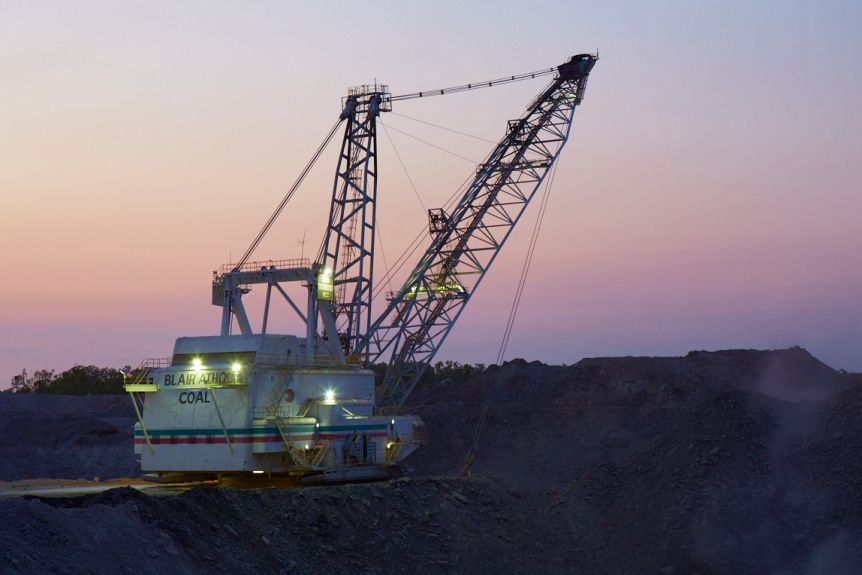 A company linked to an array of Labor figures, which bought a mine for just $1, enjoyed multi-million-dollar refunds from its environmental bond after concessions from the Palaszczuk Government, Right to Information documents (RTI) show.

The ageing Blair Athol mine, which TerraCom bought from Rio Tinto, came with an $80 million rehabilitation bond that the Department of Environment and Science (DES) initially wanted to keep in full.

The State Government requires miners to provide bonds to cover the cost of restoring the mine site, in case they go out of business.

However, TerraCom, which has restarted coal mining at the site, has since gained access to almost half the restricted cash despite officials saying site restoration could cost taxpayers “significantly” more than TerraCom’s calculations.

The Government has reduced the bond by about $8 million and allowed the company to access a further $27 million cash in exchange for an insurer’s guarantee for the same amount.

Documents obtained under RTI laws by anti-mining group Lock the Gate shed light on the concessions the Government made while touting reforms to protect taxpayers from the costs of abandoned mines.

TerraCom fought for more than two years against the public release of the documents.

They included a departmental briefing note that said its decision was likely to be of “significant community and public interest”.

However, DES told TerraCom it was keeping the $80 million cash until TerraCom’s topsoil trials succeeded.

A departmental briefing note on the day of the decision said TerraCom’s topsoil plan was “not considered by [the department] to be best practice and contains unproven rehabilitation methods”.

It warned the bond would need to “increase significantly” if it failed.

But the following year, TerraCom’s plan of operations showed a key topsoil trial had failed, and the department has told the ABC that trials are still “underway”.

Jim Soorley, a TerraCom director and former Labor Brisbane lord mayor, confirmed to the ABC he was involved in discussions with DES around topsoil, saying the company had acknowledged it had to deal with the deficit.

The documents reveal that two weeks before the June 2017 decision to reduce the bond, a DES officer told a manager that TerraCom’s proposed bond did “not adequately address the [topsoil] deficit”.

The DES officer told her manager that she “just wanted to keep you informed in case Jim Soorley gets wind of the topsoil aspect in the next 24 hours”.

When asked by the ABC if he lobbied anyone in Government, Mr Soorley said: “I’m on the board of TerraCom, so if I had any discussions with anyone it’s not lobbying.”

A DES spokesman told the ABC the initial $5 million refund was “due to the site’s new owner making changes to the mining and rehabilitation plans” which are cheaper to execute.

On the day DES approved the reduced bond, it first told TerraCom it was “going to have to cost for the removal” of a contractor’s coal handling facility at the site.

Less than six hours later, the department backflipped, saying it would “not include the cost for removal … while [another company] retain[s] ownership”.

Last July, DES again cut the bond to about $72 million “due to rehabilitation that the company has undertaken”, meaning another $3 million cash refund for TerraCom.

But there was less land rehabilitated than when TerraCom took over the site — 66 fewer hectares in all after the company began re-mining other areas Rio Tinto had restored, according to a plan of operations.

In January, TerraCom announced the Government had released another $27 million “of the restricted cash” after an insurer agreed to cover that amount of the bond.

It said the bond now “only requires cash backing of $45 million” because “an independent third party has assessed the maximum rehabilitation exposure at the Blair Athol Mine site to be no more than $45 million”.

A Treasury spokesman said TerraCom has used an “approved insurer” and the state’s surety cover for about $72 million was “unaffected”.

A DES spokesman said TerraCom has now applied for a new estimate of the cost of rehabilitation.

The $35 million in cash refunded from the rehabilitation bond so far amounts to half Terracom’s current share market value of about $70 million.

‘An accommodation above and beyond’

He said the Government had made “an extraordinary set of concessions … an accommodation above and beyond what you normally expect from the Government, with this particular company”.

The company also paid to meet then-treasurer Curtis Pitt at the 2016 Labor state conference after meeting with him earlier that year.

Mr Milner did not respond to the ABC.

Mr Soorley and Mr Wallace have each met with Deputy Premier Jackie Trad since January 2016 on behalf of other companies.

The ABC is not suggesting anything improper took place or that ministers intervened in the decisions around the environmental bond.

Mr Humphries said the RTI documents showed “there’s been an intense campaign on the Department of Environment and Science to water down the requirements for rehabilitation in terms of quality”.

“If you’ve got $80 million cash in the bank to cover off the state’s liability, it doesn’t get better than that.

“There’s no rationale why the Government would have allowed the company to use that effectively as a drawdown account to prop up their balance sheet.”

The RTI documents show Queensland Treasury Corporation (QTC) in 2016 found it “highly unlikely that TerraCom has the financial capacity to meet its operational or environmental obligations to maintain the Blair Athol mining lease”.

In reply, TerraCom told QTC it had the support of a large trading house Noble Group — a sales agreement with a Chinese coal company — had also raised more than $400 million in equity and debt funding, and recommenced mining in Mongolia.

But QTC said it maintained its conclusion that it was “unlikely TerraCom would be considered an investment grade company” and the main concern was its “ability to meet rehabilitation costs”.

Tim Buckley, from the pro-renewables Institute for Energy Economics and Financial Analysis, said the refund of rehabilitation cash had been important to TerraCom’s survival.

He said the release of $27.5 million from the rehabilitation bond beefed up cash reserves when “operating cashflow in the last six months was negative”.

The DES spokesman said the areas where topsoil trials were happening “will not be included as part of the site’s rehabilitated area until the practice is shown to be successful”.

A spokesman for TerraCom said the company “always has and will continue to comply with the DES financial assurance obligations and requirements for its mine site”.

“Everything has been conducted according to government policy,” he said.

He said since taking over the lease in May 2017, the company had successfully restarted the mine, with 100 employees and ramping up production to “in excess of 2.5 million tonnes of coal sales per annum”.

The spokesman said TerraCom “continues to maintain its focus on growth and providing much-needed jobs to regional Australia during these difficult times”.

In recent months, TerraCom has rejected “unfounded” allegations in the Federal Court by a former employee, who accuses it of involvement in fraudulent export coal valuations and overseas bribery.