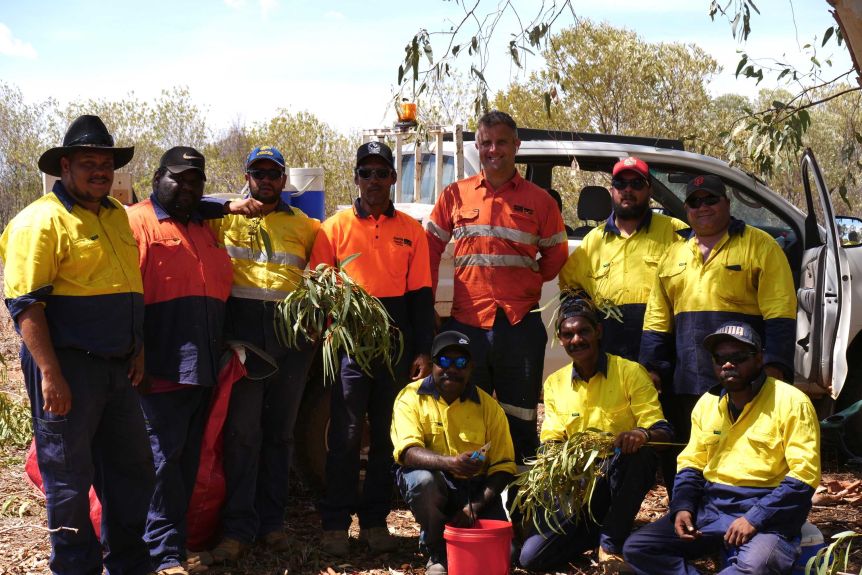 The closure and rehabilitation of Australia’s most famous diamond mine is being seen as an opportunity for traditional owners to reconnect with country and grow an exciting new business venture in the remote East Kimberley.

The iconic Argyle mine, 3,000 kilometres north of Perth, was a production powerhouse for almost four decades, producing more than 90 per cent of the world’s supply of pink diamonds. Early this month, the very last of the rare, precious gems were mined from the site.Traditional owners have a connection with this ancient landscape that spans generations — all the way back to the ‘barramundi dreaming’.

“We have a dreaming over in the hills, the actual diamonds themselves are a part of that dreaming,” Gija man Kolya Sampi said.

“Back in the dreamtime, our tribal ladies were trying to hunt the barramundi and the scales fell off. They are the diamonds they found today.”

The former Kimberley tour guide recalled the dreamtime story as he walked through the Argyle mine lease with the Gelganyem seed team, delicately bending branches of Bauhinia trees, shaking its fruit into a bucket.

Mr Sampi is one of 14 Indigenous pickers collecting native seed to help rehabilitate the former Rio Tinto mine site.

“To us it’s mega just looking after the land, conserving these trees, making sure we have a bit of work for next year and the years to come,” he said.

“We talk about it when we go back into town, yarn about it with the kids. Get them interested while they’re young so they have a job opportunity in the future.”

It is a proud moment for the Gija man who is working alongside his brother Ronald McHale, a supervisor on the project.

“It is very good to come back on country,” Mr McHale said.

“The guys we got together at the moment are amazing. You show them a tree, you show them a seed, they’ll just get stuck into the work.

“There’s still a lot to learn … but I’m enjoying every bit of it.”

In the space of a day, the group can collect tens of kilograms of seed.

Once picked the seed is transported to the Gelganyem processing shed in Kununurra, approximately 200km north of the mine site.

There the seed is processed through a thresher and cleaning machine, then weighed and bagged before being stored in a giant seed library ready to be sold.

Seed samples are also collected and sent to a laboratory in Perth for viability testing.

Traditional owner Steven Clark has been trained to operate the facility and hopes to see the processing team expand into the future.

“It’s very important work, it teaches us young people to be more responsible for the country….

“Hopefully it encourages everyone to go back out on country.”

Gelganyem is hoping to take its restoration business one step further, recently starting propagation trials to turn seed into nursery stock which they hope to start planting on-site early next year.

The team works alongside seed collection manager Adam Guest and under the guidance of Curtin University ecologist Adam Cross, the manager of restoration services for Gelganyem.

Mr Guest said the project’s aim is to eventually become a sustainable, fully autonomous business offering rehabilitation services across the Kimberley and beyond.

“At this moment in time it’s about traditional owners repairing their country and giving someone a job pathway for the next couple of years,” he said.


“But beyond that it’s about building a sustainable business model which allows TOs (traditional owners) to work for the future, not just for them but for their kids and their kids as well.

“The seeds we are collecting are local to the area but that doesn’t mean we can’t transfer the skills throughout the Kimberley and hopefully through WA.

“We’ll set ourselves up well to do this for any mine site.”

It is hoped if this project continues to grow it could be used as a blueprint for other Indigenous communities across Western Australia.

“That would be another goal — to help other traditional owner groups, taking the information that we’ve gained from here,” Mr Guest said.

“Giving them the ability to not just pick the fruit, but also to process, to propagate and plant the fruit, and also maintain the seed once it’s grown [so] they’re trained throughout the whole project.

“I’d like to give TOs a job, moving forward, for life.”

The start of a new chapter

Back at Argyle, the general manager of the former diamond mine Andrew Wilson said the closure and rehabilitation process would take five years to complete, followed by a further period of monitoring, before the land is handed back to its traditional custodians.

The Gelganyem Trust manages the funds and assets under the Argyle Participation Agreement on behalf of traditional owners.

The Indigenous Land Use Agreement, registered in 2005, provides for the transfer of the lease to traditional owners at the completion of mining operations and for the recognition of native title rights over the area.

Returning the land to its former glory is a legacy Kolya Sampi is proud to establish for future generations.

“The land coming back to life … I hope I’m still around to see that,” he said.

“It will take a while but my kids and grandkids will actually see that, and I hope they appreciate that too.”