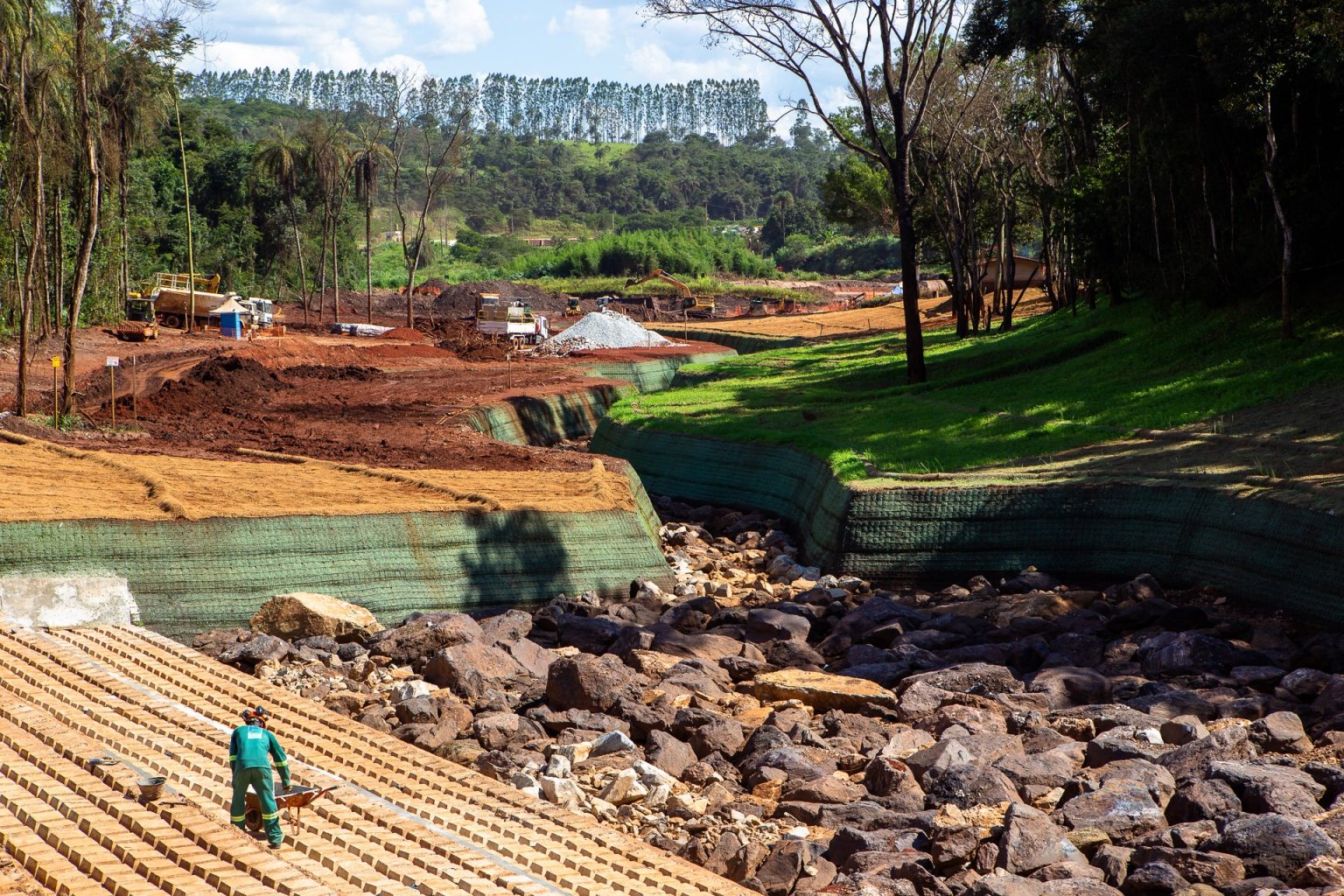 Vale launches the pilot project for environmental recovery of an area affected by the breach of dam 1 (B1) at Córrego do Feijão mine, in Brumadinho (Minas Gerais). Known as Zero Milestone, the program aims to re-establish the original conditions of Ferro-Carvão stream, revegetate the riparian forest with native plants, and recover Paraopeba river. The project scope includes installation of the sheet pile wall next to the new bridge at Alberto Flores avenue; it goes 400 meters downstream the Ferro-Carvão stream and two kilometers after the confluence with Paraopeba river. Zero Milestone is a pilot project to be evaluated, adjusted and, once proven effective, can be replicated to other impacted areas on a case-by-case basis. So far, the program has demonstrated efficiency considering the rainfall in the region. The pilot project is expected to be completed by February this year. Investments in the program are part of the funds for emergency containment works in Brumadinho, which should amount R$1.8 billion by 2023. The first challenge of the project was to re-create the layout of the stream prior to the breach. Vale removed 130,000 m³ of tailings from this stretch and, based on topographic surveys and searches to Google Earth history, the original course of the stream was marked. Using the Green Wall technology – a patented system for recovery of watercourses and riparian forests -, Vale re-created the stream channel with rocks at the bottom and walls of biomantle (revegetation). After re-creation of the channel, the surrounding area – the valley of Ferro-Carvão stream – was backfilled and leveled, recovering its original topography.

The revegetation process of the area defined in the Zero Milestone project will be carried out in three phases. The first phase began after re-creation of the channel of Ferro-Carvão stream. Part of the surface has already been covered by a type of fertile topsoil, and selected groundcover species were hydroseeded (water-aided sowing technique) in the soil. Then, the company applied natural biomantles made of coconut fiber above the sown layer to protect the seeds from the harmful action of birds or rainwater, ensuring an ideal environment for germination and plant formation. In the second phase, medium-sized vegetation will be planted to provide favorable conditions for the third and last phase, which is planting native species of the region. The native species to be used are being defined as well as their origin. Studies are also being done to quantify the number and spacing of seedlings, based on the original composition of the region. Vale states that a forest assessment of the area was carried out to register, catalog and tag each individual (plant) and that, together with the State Institute of Forests (IEF, Instituto Estadual de Florestas), also performed a careful evaluation of the affected species. Species already withered and that would impact safety have been excluded. There are still attempts to recover trees that are at risk of withering away. In such cases, the plants are being cared for and monitored. It is worth noting that the complete revegetation process takes time and is directly affected by external factors, such as climate and the natural cycle of growth and development of plants and the biome itself.

For this action, Vale has assigned a multidisciplinary team of about 60 people at the peak of the activities. The company has also been dedicated to deploying a safety, health, and environmental management system throughout the Zero Milestone project. In addition, the company has applied a lean construction model aiming to reduce the impacts during and after construction works, allowing a healthy development of the species used for environmental recovery. Tailings dredging activities on the first two kilometers of Paraopeba river after the confluence with Ferro-Carvão stream complement the actions of the Zero Milestone project. Vale has already removed 59,000 m³ of tailings from the first 400 meters of the stretch. The material removed during dredging is stored and dehydrated in large geotextile bags. The water drained from these bags is pumped into a treatment plant and returns clean to Paraopeba river, in compliance with the standards set out by the National Council for the Environment (Conama, Conselho Nacional de Meio Ambiente). All actions are monitored by an independent technical audit assigned by the Prosecution Office of Minas Gerais and systematically reported to the competent authorities.

Stream channel was re-created with rocks at the bottom and walls of biomantle (revegetation)
Originally published by Vale.

Decipher is hosting a webinar, The Investor Mining and Tailings Safety Initiative: What’s Next?