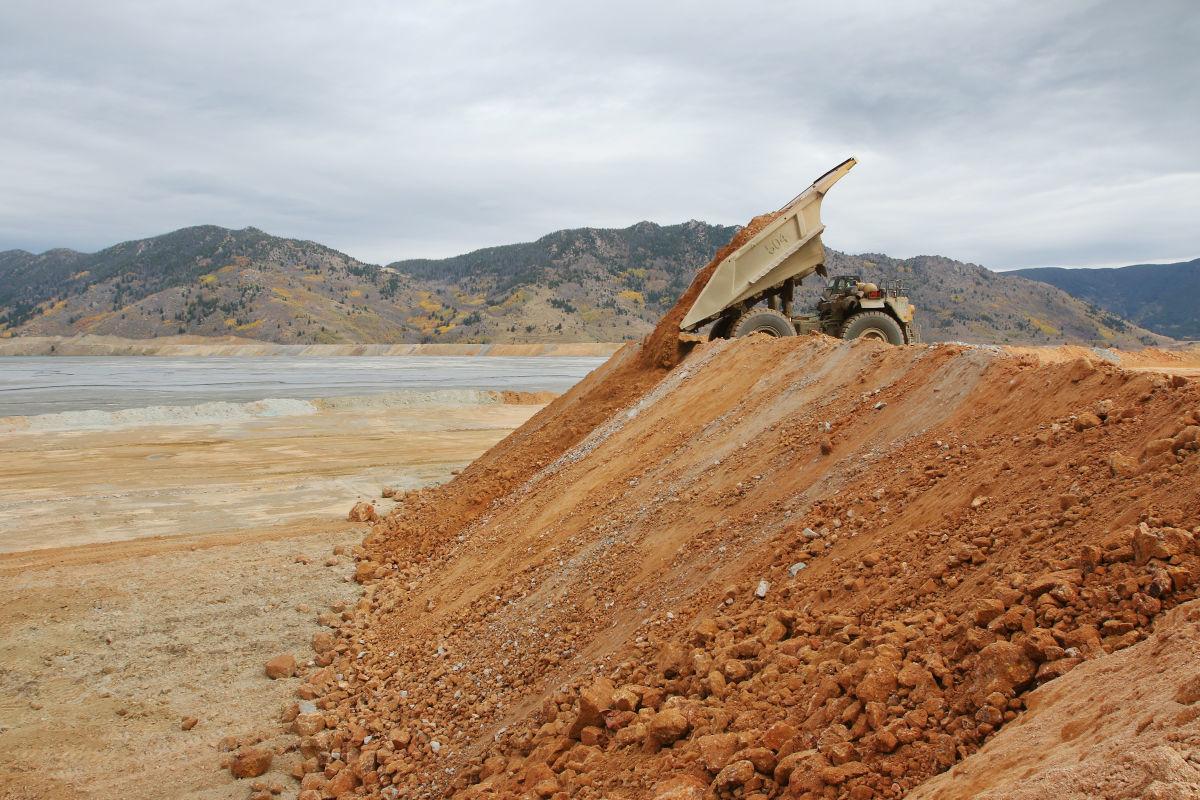 On August 4, 2014, the tailings dam at the Mount Polley mine in British Columbia breached and spilled millions of tons of mine waste into local waterways. Helicopters from the Cariboo Regional District and various media buzzed over the widespread damage, capturing the aftermath on video.The moment she saw the video, Tammy Johnson, executive director of the Montana Mining Association, knew something had to be done. Ever facing scrutiny and criticism from environmental groups and outdoor recreation advocates, the mining industry in Montana needed to do not just something, in Johnson’s opinion. It needed to do everything it could to prevent a disaster like Mount Polley from ever happening. The director immediately convened her membership and suggested what at the time seemed unfathomable.

“I think we ought to regulate ourselves,” Johnson recalled telling them. “‘Or else we’re going to have to let someone else do it for us, and we’re not going to like that.’ I thought I was going to get kicked out of the room.”

Then she showed them the video. “Eventually, everyone realized it was the right thing to do. No one wanted to be responsible for what we saw on that video.” Over the next several months Montana’s mining leaders produced the most progressive and comprehensive draft of standards for tailings storage facilities its industry had seen to date. The process was onerous and tedious, but worthwhile.

“We pulled from everywhere, the best of everything we could find,” explained Mark Thompson, who was president of the MMA at the time and who’s now in charge of environmental affairs at Montana Resources.

The Montana team reviewed tailings standards and regulations from all over the industry. They consulted experts and regulators from near and far. They looked at the technical report issued by a team of independent experts who were hired to review the Mount Polley failure. They had the independent experts look at their draft and suggest revisions, which were made. Once they had a solid revision, they turned it into a draft bill and entered into the political arena of the Montana Legislature. Senator Chas Vincent from Libby sponsored the industry’s bill, Senate Bill 409 (SB409), and lauded it as “a proactive Montana solution to protect the environment and mining jobs.” The legislation laid out cradle-to-grave management priorities for tailings storage facilities in four bullets governing their design, operation, monitoring and closure: These management priorities were ensured by requiring an experienced Engineer of Record for each operating mine with a tailings storage facility. Further, each one must develop a document known as a “TOMS,” or Tailings Operations, Maintenance and Surveillance manual, which lays out responsibilities for all aspects of the tailings facility’s management, including an emergency response plan. The engineer must certify the manual as well as inspect the tailings facility and review compliance with the manual annually. For any new or expanding mines with tailings storage, there are even more stringent safeguards that apply. Those mines must create an independent review panel of three licensed engineers who are recognized experts in tailings-storage facilities. The panel is paid by the mine to oversee the work of its Engineer of Record, from design to closure. Further, any new or expanded tailings storage facility must include a design analysis of over 30 detailed items, site specific to each applicant. The design analysis assumes the most extreme consequences if the dam were to fail and includes but is not limited to the TSF’s ability to withstand maximum credible earthquakes and maximum probable floods. Under Montana’s regulations,  “All (tailings facilities) are classified as extreme (in terms of) consequences of failure,” explained Dr. Dirk Van Zyl, a world-renowned mining and tailings expert from the University of British Columbia. “It’s very conservative and I think it’s appropriate.” Van Zyl served on the Mount Polley review board and is a current member on two IRPs in Montana. He’s also a prominent voice in global tailings conversations. As a result of the Mining Association’s work and the work of Sen. Vincent, the bill passed almost unanimously. Even more exceptionally, the new regulations were even praised by the industry’s usual and most vocal opponents. A conservation director with Montana’s Trout Unlimited described SB409 as “almost a perfect bill,” while the Montana Environmental Information Center hailed the bill as “a victory,” listing it among the good bills that passed during the 2015 legislative session. Governor Steve Bullock signed the bill in May of 2015. As fate would have it, Thompson was the first mine manager to shepherd the industry through how the new Montana law applied to a tailings storage expansion – for Montana Resources’ Yankee Doodle Tailings Impoundment. Johnson described Thompson’s going first as fortuitous. “I don’t know if the revelation that he was going to be first was on his radar screen, but we couldn’t have picked a better one. He knew (the law) from top to bottom.” Almost five years old now, Montana’s law has worked even better than intended. Mines have not only complied with the regulations, but most operations have gone above and beyond. “Even though we’re not required to have an IRP looking at our existing facilities, we do anyway,” said Matt Wolfe, environmental manager at Sibanye-Stillwater’s East Boulder platinum and palladium mine.

Another example of how the new law has improved operations, Wolfe explained, is the vast increase in automated monitoring employed as a result of the EOR and IRP’s expertise. Instead of physically monitoring a dozen survey monuments on its TSF once a month, Sibanye-Stillwater now has automated GPS sensors, which survey each point every 30 minutes and reports data in real time via a computer control system.

“If there was ever any movement, you’d see it almost immediately,”

Wolfe said, which would then trigger email and text alarms to personnel. Montana Resources also has seen similar improvements in both the technology and the number of monitoring points it employs at the YDTI. There were less than ten monitoring points in the embankment prior to 2012. Today, there are over 100 points established, all of them monitored remotely in real time. For critics of the industry who may question the actual independence of the required IRP members, Van Zyl offered the following assurance. “Both of the IRPs that I am on, our attitude is that we’re working for the people of Montana. We are not working for the regulators. We are not kowtowing to the companies or what the consultants say. Often we insist on adding quite a bit of work and so far, both Stillwater and MR have been very accepting.”

Unfortunately, many other places in the world did not act as Montana did in the face of the Mount Polley incident. While industry standards continue to improve, many regulatory jurisdictions, especially those in developing countries, leave adoption of these best practices up to the individual mining companies. As a result, two of the worst disasters in modern mining history have occurred after Mount Polley. Less than 80 miles apart from each other in the Minas Gerais district of Brazil, two tailings dams at iron mines collapsed in separate, devastating events that killed people and wreaked environmental ruin in both cases. The first dam collapsed in November of 2015, known as the Mariana disaster in which 19 people were killed. One of the mine’s owners, Vale SA, proclaimed as part of a commitment to reform its safety standards, “Mariana, Never Again!” But in January of 2019 a 282-foot high tailings dam at Vale’s Corrego de Feijão mine liquefied and collapsed. The cataclysmic event, which was also captured on video, unleased millions of tons of mining sludge in an explosive wave on top of the unsuspecting residents of the small town of Brumadinho. More than 250 people died and people are still missing. As a result, the former CEO of Vale and 15 others are currently under criminal investigation. The Global Tailings Review was begun shortly after the disaster at Brumadinho. GTR is a carefully crafted collaboration of the International Council on Mining and Metals, the United Nations Environment Programme and the Principles for Responsible Investment. It is a comprehensive effort by multiple stakeholders to create an international standard for the design and management of tailings storage facilities to prevent such catastrophic failures. Part of the Global Tailings Review’s governance includes a seven-member expert review panel. Dr. Van Zyl is one of the GTR expert panel members and said he has referred to the Montana regulations often. Partially as a result, one of the tenets in the newly proposed standard is to classify all new facilities as extreme. This has received significant pushback from some members of the industry yet praise from a number of others in the NGO and public sector. Independent review boards are also a requirement of the global standard — another shadowing of the Montana law.

“To me, the concepts of being a very high standard of design and the expectation of independent, expert review are two places where Montana led the way, definitely in the U.S. and also the world,” said Van Zyl.

“This is something that is not general knowledge to everybody but should be recognized.”

The GTR released its initial draft of standards in September of 2019 and spent the rest of the year consulting with stakeholders across the globe in forums, both virtually and in person. Consultations were delivered in seven different languages. After considering input from these venues, the GTR initially expected to release a new international standard sometime in the second quarter of 2020. But the COVID-19 pandemic has compromised those plans. On its website, GTR chairman Dr. Bruno Oberle stated “due to the challenges, both personal and operational, that we are all facing as COVID-19 spreads across the globe” that  he and the co-conveners had taken the decision to delay the final standard’s publication.

“At this state, we cannot predict when this will be, but we will ensure to keep our stakeholders up to date.”

Whenever the standard is finally released, folks in Montana can be proud in knowing that the leadership of its own mining industry had something to do with it. Originally published by Montana Standard.

Learn more about The Investor Mining and Tailings Safety Initiative is this FREE webinar Hear from Professor Elaine Baker, one of the driving forces behind the database and learn about: