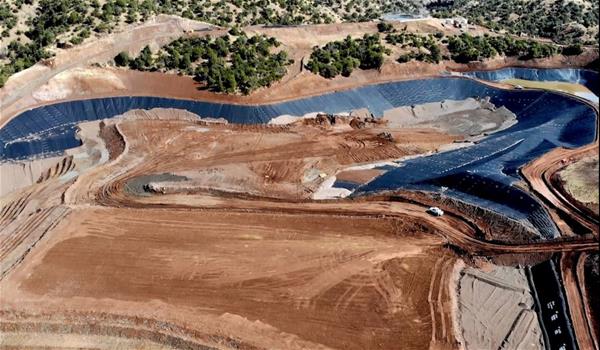 The history of Hermosa

Located in the Patagonia Mountains approximately 80 kilometres south-east of Tucson, Arizona, the historic mine site once known as the Trench Mine, had not operated for 50 years.

The Hermosa Project, a development option near the Town of Patagonia, was acquired by South32 as part of its $1.3 billion acquisition of Arizona Mining in August 2018.

With a goal for net-zero emissions and water recycling, South32 has completed a $30-million voluntary remediation project project to protect ground and surface water near the site. The Trench mine’s ancient tailings storage facility has also been redesigned as a dry stack system.

Hermosa comprises two major mineral deposits, Taylor and Clark, and is now projected to be one of the top four zinc producing mines in the world.

Previously, the tailings had a high moisture content and were located directly on native ground. This once-common type of TSF allowed for stormwater to soak through the tailings, reach the native ground, and enter local waterways during heavy rainfall events, carrying with it heavy metal contaminants.

“There were some legacy environmental issues at the site that we inherited that needed to be cleaned up. South32 was able to complete this cleanup by working with the State of Arizona through their Voluntary Remediation Program focusing primarily on some old mining waste piles called tailings, “ said Pat Risner, Hermosa President.

The TSF has now been redesigned as a dry stack system, which means the tailings are highly compressed with low moisture levels – minimising the risk of run-off. A multilayer liner system now underlays the dry stacked tailings, which collects any water that soaks through the tailings and feeds it to a water treatment plant. The liner system includes sophisticated leak detection.
The redesigned TSF complies with the Australian National Committee on Large Dams – a globally recognised industry standard for tailings management.
The remediation work was completed in accordance with the Voluntary Remediation Program of the Arizona Department of Environmental Quality. The approach adopted, which was selected to ensure the highest standards of safety in tailings storage and water conservation, cost over US$30 million. The project commenced in 2017 and involved over a million combined work hours from South32 employees and contractors, most of them local to Santa Cruz County.
Pat Risner, said: “South32 works to high standards because that matters deeply to our stakeholders, whether they own wells downstream from our site, own livestock close to the waterways, or own shares in our company. It also matters deeply to all of us who work at Hermosa. We need to be able to hold our heads high when we talk about our work, and I’m proud to say that our project team can do that.”

“It’s a win for the environment, and that’s first and foremost. It’s a win for South32, because they have a viable mine site, and they’re going to be able to be in that area for a long time. And it’s a win for the agency, because we know we have a site that is being managed appropriately and works well with the agency to address any of our concerns.”
– VRP program director for ADEQ Laura Malone

South32, which is based in Perth, Australia, operates mines throughout the world. Hermosa is its first project in North America. It has set a company-wide goal to create net-zero emissions at all of its operations by 2050. The company is among today’s growing list of mining companies focused on the environment and sustainability in response to climate change, strict regulatory controls, and public demand.