Mine rehabilitation laws expected to be passed by the Queensland parliament this week would allow coal miners to leave more than 200 voids as pockmarks on the state’s landscape. In recent days the mining sector, in a campaign backed by both the Queensland Resources Council and the Construction, Forestry, Maritime, Mining and Energy Union, has piled pressure on the government to delay the legislation and ensure new regulations would not be retrospective. The laws would place additional requirements on newly approved mines, requiring areas such as voids and waste ponds to be rehabilitated in most cases. But the state has repeatedly said those laws would not be applied to existing mines or rescind previously approved environmental management plans. Queensland coalmines have approval to leave 218 voids as “non-use management areas” that do not require filling or remediation. In many cases, management plans allow miners to do the “bare minimum” to remediate sites. Rick Humphries from Lock the Gate said amendments to the laws were needed to “ensure taxpayers are not left with the clean-up bill when miners decide to abandon their responsibility”. Humphries said there was limited benefit to laws that only applied in a significant way to new mines, considering the slowing pipeline of new projects, particularly in coalmining areas. A large number of projects are coming to the end of their life cycle. “Whatever the cost of fixing up the mess is, the industry should pay for it,” Humphries said. Lock the Gate conducted polling last month in three central and north Queensland marginal electorates. The results showed overwhelming support for strict rehabilitation requirements: 91% of those polled wanted mining companies to backfill pits when mines were closed. Humphries said the laws did not seek to impose conditions on existing miners and were “a massive concession to the [mining] industry that guts their impact”. During the past week, the QRC asked for amendments and raised concerns that existing mines could be affected, despite government assurances. On Monday, the QRC released modelling to the Australian that claimed 16 mines, representing 2,500 jobs, could be lost. The treasurer, Jackie Trad, dismissed that modelling, saying it assumed the laws would be applied retrospectively. “They will not … and that’s been a commitment that has been rock solid, made public, to the resource­s sector from the outset,” Trad told the Australian. It is understood the government may make some minor amendments to the bill that do not change the intent of the laws. Humphreys said the notion that rehabilitation would cost jobs, rather than create them, was wrong. It could even help the transition to a post-mining economy by providing work and economic stimulus in areas where mines closed. “Better rehabilitation means more earthworks, more bulldozers and more people to drive and maintain them,” Humphries said. “That’s more jobs and investment in regional Queensland. “The QRC claims the cost of fixing up the existing mess left by the industry is $20bn. Well, it follows that if the industry isn’t forced to fully rehabilitate existing mines then this cost will be passed onto the Queensland taxpayer and future generations of Queenslanders.” 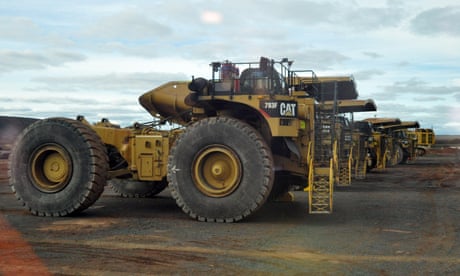 The Queensland government inherited significant problems with mine rehabilitation, including with companies passing on responsibility for remediation after mining operations have become defunct. In 2016, it passed “chain of responsibility” laws designed to prevent companies abandoning toxic and hazardous sites. A recent government review showed those laws had been used to pursue tyre yards, not legacy mines. The Texas silver mine, Collingwood tin mine, Mount Chalmers gold mine and the Yabulu nickel refinery were all cited at the time as justification for the laws; sites where environmental problems remained after companies had run into financial difficulty. The government review said they had been used “responsibly” and “cautiously”. “The legislation has not been applied to some sites, such as the Yabulu Nickel Refinery, that were cited as reasons for the introduction of the legislation. The application of other enforcement tools has achieved the necessary environmental outcomes without the further need to use the [chain of responsibility] provisions. These sites continue to be investigated and monitored.” Parliament will this week also consider a proposal for stricter environmental rehabilitation bonds paid by miners to the state government.   Originally published by The Guardian.    Find out how mine rehabilitation legislation in Australia is changing in our FREE guide. Useful links: Don’t miss another update!
Decipher Mine Rehabilitation Mining
Share on Facebook Share on twitter