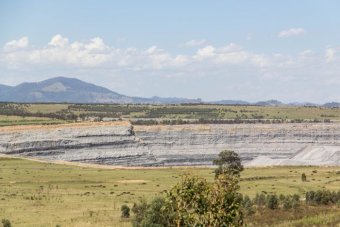 Taxpayers could one day be slugged hundreds of millions of dollars to backfill some of Australia’s biggest coal-mining pits, with a new report finding less than a third have been rejuvenated properly.

The report, from environmental group Lock the Gate, reviewed published data from nine major coal mines. It found collectively less than a third of their disturbed lands have been restored with new soil and vegetation, leaving an area bigger than the Royal National Park unrehabilitated. Under NSW law, companies are required to rehabilitate their mine sites using earthworks and revegetation to ensure a safe and stable environment is left behind after closure. While many companies do choose to backfill their pits, there is no legal requirement to do so and in some cases deep mines are abandoned and left to fill as lakes. The mines investigated are all found in the Hunter Valley. The largest, BHP’s Mount Arthur, is the southern hemisphere’s biggest raw coal mine. The report estimated 18,000 hectares of land — an area three times the size of the Sydney Harbour — needs urgent attention. It said the rehabilitation deficit was growing as mines expand. Report author Rick Humphries, a former environmental consultant for Rio Tinto, said the findings pointed to a “worst-case scenario” where some mines could “go belly up and cease production”, leaving the multi-million dollar clean-up costs to taxpayers.

PHOTO: The Hunter Valley mega-mines are up to three kilometres long and half a kilometre deep, collectively covering about 30,000 hectares of land — an area larger than five Sydney harbours.
The report recommended 60 per cent of the sites could be rehabilitated within five years. “That’s another $350 million worth of investment and job creation that could flow into the Hunter Valley economy,” Mr Humphries said. He also said NSW mines should be required by law to completely backfill all empty pits to “leave the landscape virtually as it was”. NSW Minerals Council chief executive Stephen Galilee said although modern mine plans pushed to eliminate voids, proposing a blanket approach on older mines could be devastating. “That would impose significant retrospective financial cost on operations that were approved 20 or 30 years ago,” he said. “That would cause operations to shut immediately and cost hundreds if not thousands of jobs across the Hunter.” Mr Galilee said a progressive approach to rehabilitation was already happening, with 12,000 hectares of land currently restored last year in the Hunter Valley. “The total amount of land that was rehabilitated was at its highest level over a five-year period,” he said.

“There is more work to do but our industry is focused on delivering better rehabilitation outcomes.”

Some Hunter Valley mines were planning major expansions — a fact that has angered some locals.

PHOTO: Farmer Grantley Blake lives close to two of the mines mentioned in the report (ABC News: Greg Miskelly)
Farmer Grantley Blake said a third mining development had been proposed south of his property, near Denman in the Upper Hunter. He said his grandchildren suffer health impacts from dust which he believed was from dusty sites exposed to wind.

“The air quality is absolutely disastrous, it’s usually off the scale,” he said.

“The kids have all had respiratory tract infections, enlargements, tonsils out, adenoids out, ear infections.” He believed tougher rehabilitation targets would help alleviate the situation. “Get rid of that exposed earth, that’ll keep the dust down a little bit.” The report called on the NSW State Government to consider tougher clean-up deadlines to ensure companies “pay for rehabilitation as they earn”. Senior figures within the mining industry told the ABC that NSW regulators were lagging behind the Queensland Government, which was mandating rehabilitation timelines for all active mines. Mr Galilee said the NSW coal industry was working with stakeholders and delivering what was required in the Hunter Valley. A Peabody Mining spokesperson told the ABC the company aggressively pursues progressive rehabilitation of its Hunter Valley sites. In response to the report, the spokesperson advised that approximately 460 hectares of land at Peabody’s Wambo mine is unavailable for rehabilitation because of operational needs such as “long-life infrastructure”, “active mining areas” and “haul roads”.   Originally published by ABC News.    Find out how mine rehabilitation legislation in Australia is changing in our FREE guide. Useful links: Don’t miss another update!
Decipher Mine Rehabilitation Mining
Share on Facebook Share on twitter