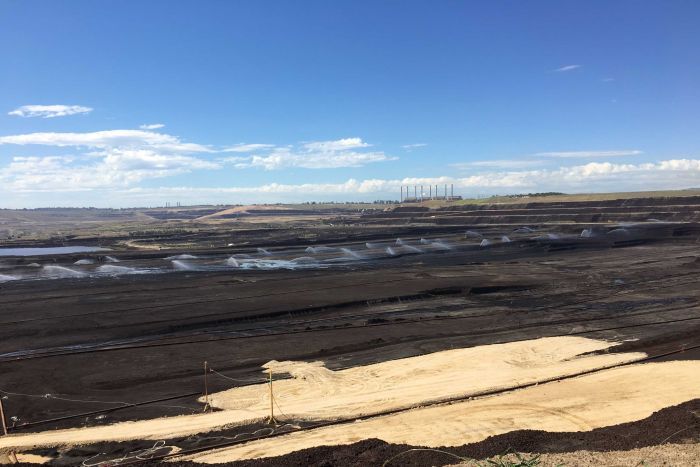 Combined, the three open-cut coal mines in Victoria’s Latrobe Valley are more than four times the size of Sydney Harbour.

The State Government is assessing whether they will all be turned into lakes when they close, which is due to occur by the middle of the century. Late last year, the Government released a report that outlined plans to fill the mines with water drawn from the Latrobe River system, which runs through the region and connects to the Gippsland Lakes. The three mines have a water allocation from the Latrobe system and the Government is planning on using that water to fill them when they close. The Government’s mine rehabilitation commissioner, Professor Rae Mackay, said filling the mines with water was the preferred outcome because it would stabilise them.

“It’s very much about safety, stability. And it’s also a little bit about sustainability as well,” Professor Mackay said.

The report looked at other water sources but found none were “of suitable quality, volume or comparative cost” to be feasible, but noted that could change in the future.

PHOTO: The Loy Yang brown coal mine is scheduled to close in 2048. (Supplied: Environment Victoria)

Filling them will take decades

The rehabilitation of the mines entered the spotlight during the inquiry set up after the 2014 fire which burnt inside the Hazelwood mine for 45 days. It found the three mines had a combined volume “more than four times the volume of water in Sydney Harbour”. The Hazelwood mine closed in 2017 and 725 gigalitres is needed to fill it, which the report said would take 15 to 20 years without interruption. Hazelwood also naturally fills with water from under ground, which needs to be continually pumped to maintain its stability. The Yallourn mine, which is due to close in 2032, will need 725GL and take 20 to 25 years to fill, while the Loy Yang mine (closure in 2048) has a capacity of 1,420GL and will take 25 to 30 years to fill.

The Latrobe River is drying

The state’s peak environment group, Environment Victoria, is concerned about the impact filling the mines will have on the river system. The Government’s report found flows into the Latrobe had dropped by 25 per cent since 1997, from 800GL to 600GL a year. It also found water availability would not be a problem until at least 2035, “after which water availability may become more limited”. Environment Victoria community organiser Laura Melville said she was concerned about the availability of water in the future.

“I think we’ve already seen the impacts of not having that much water in the Latrobe River system on the Gippsland Lakes and increased salinity in the lakes,” she said.

“And if we take even more water out of that system, who knows what the impacts will continue to be on that ecosystem?”

According to the timelines contained in the report, the Loy Yang mine would be filled sometime between 2073 and 2078.

PHOTO: The coal-fired power stations in the Latrobe Valley draw water from Blue Rock Dam near Moe. (ABC Gippsland: Jarrod Whittaker)
Jessica Reeves from Federation University said the Government’s report was good but would need to “be constantly monitored and evaluated” as circumstances changed.

“As we know, this season has been a very different season to previous ones in terms of climate, and we don’t have certainty of the climate going forward,” Dr Reeves said.

“So any plan in terms of water allocations needs to be evaluated constantly in terms of the quality of the water, the timing of the flows, what the downstream impacts are going to be, and any projections about fill rates and where that water is becoming available from, needs to be taken into consideration and re-evaluated.”

She said the plan was for the lakes to be closed, meaning the water in the mines wouldn’t be able to flow downstream and would be unavailable for other uses such as firefighting or farming.

“It would require a higher level of management and maintenance to ensure that the quality of the water was high enough to be able to be released if it was needed, but I think that would be an aspiration that’s worth considering,” Dr Reeves said.

PHOTO: Frank Mills doesn’t think it’s a good idea to use river water to turn the mines into lakes. (ABC Gippsland: Jarrod Whittaker)
The Latrobe River system provides drinking water to households in Gippsland and water to farmers for irrigation. Kilmany dairy farmer Frank Mills runs more than 500 head of cattle and draws 390 megalitres from the river. He said he hadn’t been badly affected by the drought but last year used 1,200ML on his property. Like many irrigators, he’d like to access more water from the river and is sceptical about plans to use the Latrobe to fill the mines.

“Surely the electricity companies have money in their budgets to undertake this sort of process,” he said. “I’ve sort of heard whispers that it’s the cheapest option, that by just dumping water in there and then they can walk away.

“But for us, we need access to water and not just now, for the future, and if we are in a bit of a drying climate, we need to have greater access to more water.”

The Government is due to release its final plan for the mines by the end of June.
Originally published by ABC News.