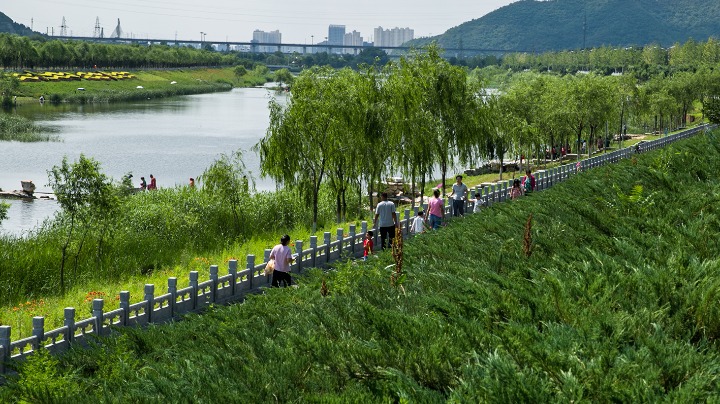 With the full closure of Datai coal mine, last in the region, Beijing will bid farewell to a thousand-year-long history of coal production. Jingmei Group (the previous Beijing Coal Mining Bureau), together with North China Institute of Science and Technology, are building a national-level training center for production accident control and prevention, and related emergency response technology, on the basis of the decommissioned mine area buildings and underground tunnels. The center is now being renovated and is expected to start operation in mid-September. And the special railway line for coal transportation will also be put back into use. The line will connect the four coal mine sites to create a tourism area integrating cultural tourism, rehabilitation and outdoor sports. The Qianjuntai mine site is located in Beijing’s Mentougou district. The total area exceeds 100,000 square meters, and there are 9,000 meters of underground tunnels. After the coal mine was shut down in 2015, the group has been exploring ways to realize green transformation. The whole project involves investment totaling 300 million yuan, including two parts, Jingxi Scientific Research Base and Jingdong Training Base.

Zhou Yanjun, project head of Jingmei Group, said the base would not add any new buildings, and the original structure of the mine area would not be changed. According to him, the plan is to transform the 19,000 square meters of ground buildings and the underground tunnels into a national-level scientific research base specific for mine, underground tunnel and subway disaster prevention, mitigation and disaster relief research. On the ground 17 laboratories will be built including the dispatching display center, inspection center, and accident analysis and evaluation center; while underground, 10 laboratory modules including unmanned excavation, unmanned mining, mine geology, and ventilation measurement will be established. Compared with other coal mines in this ravine, the Qianjuntai mine site is the most remote. Since mining was suspended in 2015, it has seldom been visited. Today, more than 200 workers are carrying out infrastructure renovations on site. The mine is now open for tourists. The miners’ dormitories were transformed into 140 hotel rooms with separate bathrooms. The miners’ canteen was redecorated into a cafeteria that caters for 150 to 200 people. The characteristics of the mine area have been preserved, such as the miners’ auditorium built in the 1950s will be renovated to create a nostalgic club. The scientific research center is expected to open in mid-September. On the basis of meeting the needs of scientific research and training, it will also undertake various services such as meetings, training and team building. In the future, Jingmei Group will work to build the area into a tourist attraction focused on the coal-mining industry. The renovation project is also expected to drive economic development of Mentougou district.