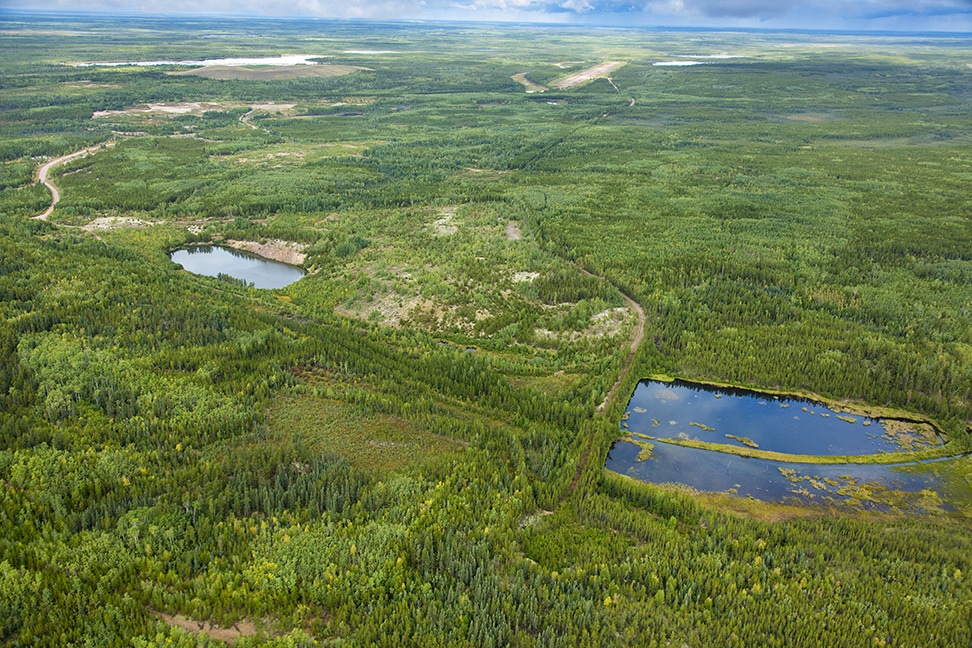 Between 1980 and 2002, the Cluff Lake mine in northwest Saskatchewan produced more than 62 million lb. of uranium concentrate, with the site also producing gold between 1984-88.

After a planning process that included extensive public engagement, the site, which once hosted four open pits and two underground mines, was decommissioned and reclaimed between 2004 and 2006. Ongoing environmental monitoring shows that the decommissioning was successful, with water quality meeting objectives, radiation levels within the regional background range, and fish, animals and plants harvested on site safe for consumption.

For operator Orano, the success of the site’s reclamation is a point of pride, especially as the project, located 855 km north of Saskatoon in Treaty 8 territory, was the first uranium mine to be subject to modern-era decommissioning and reclamation standards introduced in the late 1990s.

Now that the site has been proven to be chemically and physically stable by 14 years of post-closure monitoring, Cluff Lake is poised for another first. Orano has applied to transfer control of the site to the province under Saskatchewan’s Institutional Control Program. Introduced in 2007, the regulation is one of the first formal programs to be developed that spells out the conditions under which responsibility for a closed mine site can be transferred back to the hosting jurisdiction.

“The program provides an end state for operators, protects the public from the cost of closed mines through the establishment of funds, and provides the government with assurance that any remaining liabilities with a closed site are well understood, monitored, and if necessary, remediation undertaken,” Martens says.

Cluff Lake will be the first major uranium mining site to be transferred to the province – so far only the Contact Lake gold mine and several satellite sites of the historic Beaverlodge operation (mined between 1952 and 1982 by Crown corporation Eldorado Resources) have been transferred.

As part of the transfer, Orano will provide funds for the long-term monitoring and maintenance of the site and an assurance fund to cover costs related to unexpected events. Martens says a decision is expected in 2021 or 2022, with the approval of the Canadian Nuclear Safety Commission (CNSC) and the Saskatchewan ministries of Environment and Energy and Resources.

The reclamation and rehabilitation program at Cluff Lake took five years of planning and regulatory approvals (1999-2004), after which the work was carried out in 2004-2006. Martens puts the overall cost of reclamation in the millions of dollars. The overall focus of the work was to get the site to a state of long-term site stability without the need for active care.

The original environmental assessment (EA) for the Cluff Lake project was completed in 1978 and the EA for decommissioning was completed in 2003. In the years between those assessments, there were many other EAs and regulatory approvals completed due to changing mine plans, including the incorporation of new ore deposits. As such, the closure plans also had to be adapted throughout.

Rehabilitation work conducted at the site included decommissioning and removing all buildings, including a mill complex; backfilling mined out pits or converting them to pit lakes; and planting more than 650,000 local trees and shrubs. Underground mine entrances were also closed off and blended into the environment. The tailings in the tailings management area were consolidated into a solid mass, covered with a dry cover (local glacial till), with the cover contoured and planted with grasses native to area. The water removed from the consolidated tailings was treated prior to release.

The cover is a simple till cover, which is preferred over a complex cover, such as one with a low-permeability cap, because simple till covers are expected to improve over time with less intervention.

“At decommissioning, layers of till were placed over the tailings to isolate the placed tailings from the surface and provide a medium for vegetation growth,” Martens explains. “

Diversion ditches were constructed and the cover surface graded so that fresh water would preferentially run around the tailings area or overtop of the till cover. The tailings have a low permeability, that is, they were prepared so that it is difficult for water to flow through.”

As the tailings contain contaminants including uranium and radium, the decomissioned tailings area was designed to limit the amount of snow and rain infiltrating the tailings in order to control the release of contaminants.

“The ultimate goal of decommissioning was to remove, minimize, and control contaminant transport so that concentrations in the environment would remain well below a threshold of concern,” Martens says.

“In general, predicted peak concentrations of containments from decommissioning remain below concentrations experienced during operations when site and process water was treated in water treatment plants and met quality criteria prior to discharge.”

Ongoing monitoring has shown the success of the decommissioning.

“There is a small lake down gradient and metres away from tailings area, and there has been no evidence of groundwater contaminant transport to this lake to date,” Martens says, noting that tailings were placed starting in the 1980s.

Asked how rehabilitation of a uranium mine site differs from rehabilitation at a gold or base metals mine, Martens says the biggest difference may be with perceived risk. Although radiological safety is well understood and managed, it can dominate interest and concern.

“Like other mines, uranium mines have a poor history with legacy (previously abandoned) mines and people tend to remember past mining practices,” Martens says. “Modern uranium mines are well managed and decommissioned; the Cluff Lake footprint is safe, both now and into the future, for land uses and therefore requires no restricted access. Communicating this safe and stable state of the decommissioned footprint and to have that message confidently received is a challenge that Orano is working on.”

While Orano hasn’t maintained a full-time presence at the site in 2013, monitoring of groundwater and surface water chemistry, and groundwater levels continues, as do geotechnical inspections (for erosion, for example).

Martens says groundwater and surface water quality is monitored by collecting samples from designated locations in lakes and streams.

“The chemistry results from wells, lakes, and streams that are near and downstream of past mining and milling areas are compared to reference locations that have no past or present influence from mining and milling activities to quantify the differences, potential trends, and confirm the continued safety of potential land users.”

Those samples are collected once a year by a small crew that travels to site, while geotechnical inspections are carried out biennially by a third party crew.

The Cluff Lake site has benefitted from continuity of ownership. Known as Orano since early 2018, the company was formerly known as AREVA Resources, and before that, as Cogema and AMOK. Martens, who began working with Orano (AREVA at the time) at a greenfield uranium site in Nunavut in 2008 got involved with the Cluff Lake decommissioning project in 2016. Since then, she’s been sorting through the rich history of Cluff Lake, including stories of how the project shaped the lives of former employees, contractors and community members.

“During community meetings I often learn more about Cluff Lake history, lots of stories about the recreation club and the Raven’s Nest – an onsite gathering place and bar.”

At its height, the Cluff Lake mine employed more than 300 people. Now, the site’s main users are the public, which can access the site for hunting, fishing, camping and berry picking. The closest community geographically is Fort Chipewyan, Alta., and the closest communities by all-season road are the Clearwater River Dene First Nation and La Loche, Sask., at about 250 km away and located within the Homeland of the Metis.

“Member families of the Athabasca Chipewyan First Nation are also known to have historic and current use of the Cluff Lake area and Traditional Resource User cabins are maintained nearby,” Martens says.

As the project lead shepherding Cluff Lake through the latest stage of closure and eventually back into the hands of the province, Martens says the most enjoyable part of the process has been in integrating the technical and social aspects of closure.

“The most satisfying part of my job is weaving together the pieces into a whole – interdisciplinary thinking, working with the team to listen to and integrate community interests, and getting a clear vision of what came before and what comes after.”