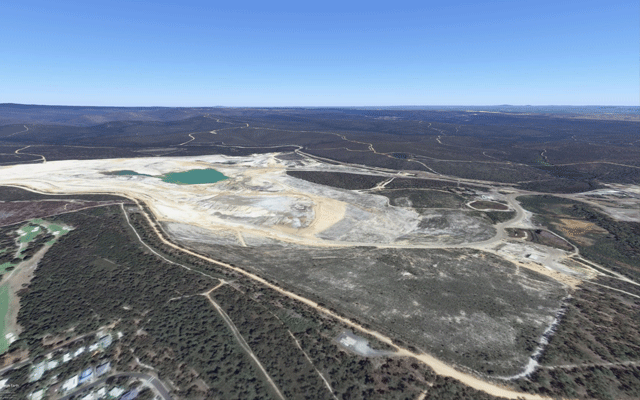 A project to rehabilitate a former Victorian coal mine and coal-fired power station into a world-class eco-tourism destination will generate 1300 new jobs and $350 million in the next decade.
The world-renowned UK charity The Eden Project and Alcoa of Australia have joined forces to propose a major $150 million concept that will transform the site, near the southern coastal town of Anglesea, into an immersive educational centre on the natural world. The major rehabilitation project, expected to be completed within two years, will follow in the footsteps of the original, award-winning Eden Project in Cornwall in south-west England. There, a former china clay quarry was converted into the world’s largest rainforest in captivity, attracting more than one million visitors a year. Alcoa operated the Anglesea coal mine and power station, 40km from Geelong, for 46 years before its permanent closure in 2015. This left an expansive industrial site and mine void surrounded by native bushland. Since then, Alcoa has released a rehabilitation and closure plan for the mine and a concept master plan for the power station site, and has been consulting with the community about its future.

‘Once in a generation’ opportunity

Framed by the Great Otway National Park, Anglesea Heath, Anglesea River, the Great Ocean Road and the Anglesea township, the project has been billed as a “once in a generation” opportunity for the community and wider Geelong region.

“The project will offer greater tourism opportunities, bring more jobs to the local economy and build on Anglesea’s history of strong environmental stewardship”

David Harland, Eden Project International
The concept was first presented to the local community in May, with 800 people attending community consultation events and 3000 engaging online. Despite expressing “overwhelming support”, some residents want to better understand what impact it could have on their quiet coastal town. Eden Project International (EPI) CEO David Harland presented economic modelling at the G21 Geelong Regional Alliance Stakeholder Forum on 30 August. It showed Eden Project Anglesea would generate $350 million in the Surf Coast Shire in the first 10 years of operation. Harland said it would also create more than 500 ongoing full-time jobs, including 300 at the site and an additional 200 supported in the wider region. This represents almost four times the number of workers at Alcoa’s former power station and mine. Meanwhile, direct construction investment for the project is estimated to be $150 million, with 170 direct construction jobs anticipated. An additional 700 jobs are expected in the wider region during the construction phase of the project.

“The economic projections for the Surf Coast region are similar to what we have achieved in Cornwall through our commitment to partnerships with the local community. “While the economic benefits are hugely significant, our engagement with the Traditional Owners of the land, building our partnerships in biodiversity and continuing our involvement in active community engagement and consultation remain priorities at this time.”

As well as the Anglesea project, EPI, which is the global wing of the Eden Project, is currently working on projects in China, Dubai, the USA and the UK.

The Anglesea coal mine and power station previously supplied about 40 per cent of the power needs for the Point Henry smelter in Geelong. Following closure of the smelter in August 2014, it operated as an independent supplier to the National Electricity Market, before later ceasing operations in August 2015. The decommissioning of the power station and remediation activities in the former mine site are well underway, including the felling of the power station structure by controlled explosives in October 2018. Alcoa’s Anglesea site asset manager Warren Sharp said the company hoped to leave a legacy that benefits the Anglesea community economically, environmentally and socially. “We are genuinely excited to be working with an organisation as well credentialed as Eden,” he told Quarry. “Their reputation and what they have done speaks for itself. “For Alcoa, we see it as a key part of our legacy. We are privileged to have operated in such as fantastic area for almost 50 years. We had a good relationship with the community by and large but in reality people won’t remember that, what they will remember is what we leave behind.” The critical next steps for Alcoa and EPI are the resolution of the water strategy to fill the mine void and determining the relevant planning process for the next phase.


YotuWP warning: API Key was removed, please contact to your admin about this issues.