When a tailings dam ruptured in the state of Minas Gerais in southeast Brazil last year, it was a harsh reminder for the mining sector that it needs to consistently operate within the parameters of strict controls and stay alert to potentially tragic risks.

The disaster – at Vale’s Feijão mine in Brumadinho – led to the deaths of 270 people after the ruptured dam flooded a nearby community.

Just over a year later, and it would appear that not only has the mining industry been slow to learn lessons from the tragedy, but also that not a huge amount has improved since.

A recent report by Switzerland-based Responsible Mining Foundation found that while an investor-led initiative has resulted in improved transparency about companies’ tailings storage facilities (TSF), the vast majority of miners are still unable to demonstrate they are reviewing the effectiveness of their management of tailings risks and taking responsive actions where necessary.
Critically, the report – encompassing 38 large-scale mining companies operating in more than 780 mine sites – also found that very few mine sites show evidence of having informed local communities about what to do in the case of a tailings-related incident.
It is a damning indictment of an industry that says it has put environmental, social and governance issues at its center and pledged to safeguard lives, improve performance and demonstrate transparency.
Miners that contributed to the Foundation’s year-long study, known as the Responsible Mining Index (RMI) 2020 report, included majors such as Anglo American, ArcelorMittal, Barrick, BHP, Codelco, Freeport-McMoRan, Glencore, Rio Tinto, Rusal, Teck, Vale and Vedanta, along with other large producers from around the world.

As the report notes, prior to the Brumadinho disaster there was no global public register of TSF – mining companies were generally not publicly disclosing even the location of their TSF, let alone information on how safe they were. It has been estimated that there are around 18,000 TSF worldwide, of which roughly 3,500 are currently active. But without a global register the scale of the risks is unclear; it is also uncertain which company has responsibility for which facilities.

It is not as if it is a new issue, or one that will go away. The mining industry is always going to have to deal with the storage of tailings, the residual waste generated as byproduct of its processes. Those tailings are typically piped into large surface impoundments and held in place by earth-fill embankment dams, which can become unstable over time.

When the Feijão mine dam ruptured and the alarm was raised, a group of investors spoke up. Led by the Church of England Pensions Board and Swedish Council of Ethics of the AP Funds, they set up the Investor Mining & Tailings Safety Initiative and demanded action. The investor group requested over 700 extractive companies to publicly share TSF information and called for a new independent and publicly accessible international standard for tailings dams.

Although many miners declared Brumadinho to be a wake-up call for the sector, the response was mixed, to say the least. Roughly half the companies responded to the request for data, including 45 of the 50 biggest mining firms. A multi-stakeholder group co-convened by the United Nations Environment Programme, the Principles for Responsible Investment and the International Council on Mining and Metals, meanwhile set up a group to create a global standard.

The good news is that the appeal for tailings information has significantly improved the availability of basic data on TSF and allowed for higher contributions to the Foundation’s RMI report. Nearly half the 38 companies assessed in the RMI report publicly disclosed the number and exact location of their TSF, mostly due to their response to the investor request.

But the bad news is that a number of key aspects have not improved; in fact, some have worsened.

These include an increasingly heavy reliance on risky structures, no improvement in tracking the effectiveness of tailings risk management and a lack of local information on risks and emergency procedures in the case of tailings incidents.

One alarming trend is that companies are planning to increase the volume of tailings stored in upstream-constructed TSF, the same type of dam that failed in Brumadinho. The report found that 30% of all tailings will be stored in these structures, up from 24% in the 2018 report. Of this 30%, some 92% are currently classified as having a high hazard potential.

Similarly, only a handful of the 38 miners assessed in the RMI report show evidence of having conducted third-party audits or reviews of the effectiveness of their TSF management, and those reviews undertaken were typically quite limited in scope. Even fewer companies show evidence of having taken responsive actions on the basis of these reviews, despite not a single mining company scoring more than 50% on this indicator.

Not exactly a ringing endorsement for the mining sector, which is already facing a trust deficit among stakeholders, investors, financiers and the broader general public.

Similarly, the report determined that just 10% of the 180 mine sites assessed publicly disclose the areas that could be impacted by a tailings dam failure, and even fewer tell local communities what to do in the event of an incident.

There have been a number of recommendations for next steps. But far, far more needs to be done.

At a time when mining companies are battening down the hatches to deal with the impacts of the Covid-19 pandemic, it will be even more critical to keep the pressure on the sector to ensure its work to improve its record with tailings significantly improves.

Clearly, some miners are doing better than others on the tailings front.

But do not forget that the Brumadinho tragedy was not the first rupture – there is a long list of preceding accidents at other mining companies’ TSF. Most recent among these is the failure of the Fundão tailings dam at the Samarco mine in Mariana, also in Minas Gerais, which ruptured and flooded the Rio Doce basin in 2015.

Judging by the current state of affairs, it is sadly likely that Brumadinho will not be the last tailings tragedy the mining industry has to deal with either.

What is the Investor Mining and Tailings Safety Initiative? Following the recent tailings dam failures, The Investor Mining and Tailings Safety Initiative was established by a group of institutional investors active in the extractive industries representing more than $13.1 trillion in assets under management. Governed through a Steering Committee chaired by the Church of England Pensions Board and the Swedish Council of Ethics of the AP Funds, the group has called upon 727 extractive mining companies to disclose information in relation to their tailings storage facilities to form an online database.
,
How many companies have disclosed information about their tailings storage facilities (TSFs)? As of the 20th of December 2019, 46 per cent of companies contacted responded to the request. 40 of the top 50 mining companies have made disclosures which has resulted in information about thousands of individual tailings dams being made public on company websites. All 23 of 23 publicly owned companies that are members of the International Council on Mining & Metals (ICMM) responded and fully disclosed information about their TSFs.
,
How many tailings dams have had stability issues? Company disclosures to investors have revealed that 10% (166 out of 1,635) of the tailings dams reported to have had stability issues in their history.
,
What tailings reporting and monitoring tools are available? 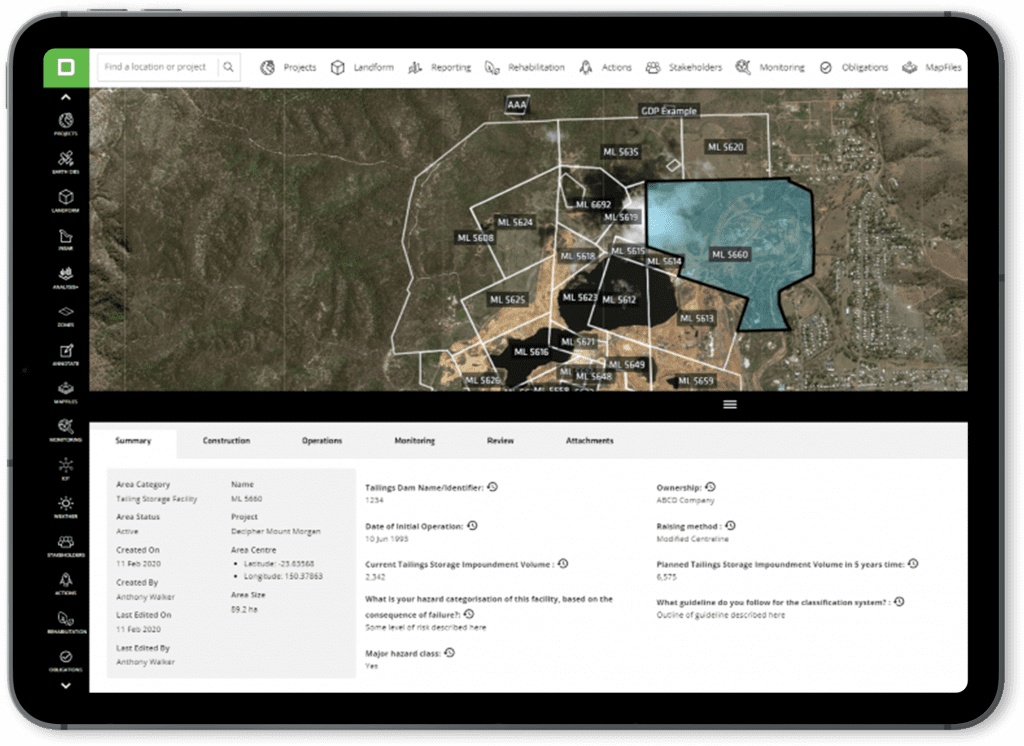 Using K2fly’s Dams & Tailings solution, you can start to organise and store your tailings storage facility data in the one place, making it easier to prepare for the next round of Church of England reports:
Decipher Mine Rehabilitation Mining
Share on Facebook Share on twitter