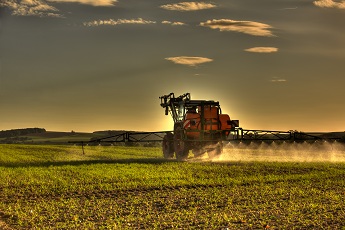 Leaching happens when water containing nutrients moves beyond the rootzone. Nitrate (NO3) is the form of nitrogen (N) most vulnerable to leaching. It is also the preferred form of N for plant uptake which means if N is available to plants it also has the potential to leach.

How much N could be lost by leaching

Studies on deep sands in WA found that in-season losses ranged from 14 – 72 kgN/ha. Most leaching during the growing season was on soils where a wheat crop followed lupins. Fertiliser wasn’t applied during these trials. Similar sites with added N would likely have more N leaching.   Modelled N losses on deep sands were up to 116 kgN/ha.

Where and when is leaching a risk?

The extent of leaching depends on soil texture and structure, weather, and rootzone extent. Soil properties influence N leaching because they affect how water moves. Conditions at greater risk of N leaching are:

How far does N move?

This table gives a rough idea of how far NO3 might move after 10 mm of rain on soils already at field capacity. It assumes the water picks up NO3 as it percolates, and takes the NO3 with it.   Source: Wayne Pluske, estimated from data and models on water movement.

How to reduce leaching

Some fertilisers can partially control N availability and movement. Ammonium-based fertilisers (e.g. ammonium sulphate, MAP, DAP) and urea release NO3 slower than nitrate-based fertilisers because N needs to be converted to the leaching-prone NO3 form. If N from fertilizer is not in the NO3form when it rains, it will be less prone to leaching. Nitrification inhibitors can slow NO3 availability and reduce leaching potential but are not yet cost-effective.

Excess soil N to plant requirements (whether from fertiliser, legume-derived, or organic N) is at greater risk of leaching. Don’t overapply. Adjust N application rates based on the season and tests to meet realistic crop goals.

Split N applications can decrease leaching, as well as seasonal risk. Assess the season, especially likely yield, before applying in-season N. Deferring N application until the crop has a root system and N demand is about to increase also decreases leaching risk. Research in WA shows that show that deferring N fertiliser application to stem elongation in cereals and yellow bud in canola gives equivalent yields to earlier application.

Deeper plant roots will recover N that would otherwise be leached. This reduces the need for additional fertilizer N. Fixing subsoil constraints like compaction and acidity enables roots to grow deeper and absorb more N.

If you’re on sandy soil and a big downfall has just come through, it’s a good idea to check if N has leached, and if so, how much. Take deep soil tests to check N stocks at depth.   Originally published by Communities GRDC. Useful links: Don’t miss another update!
Decipher Management Zones Sampling
Share on Facebook Share on twitter