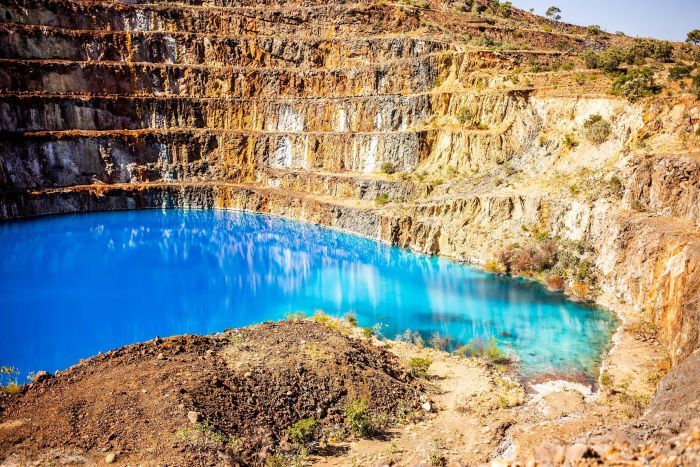 Driving into Mary Kathleen in outback Queensland, it is the eeriness of the ghost town that first catches the tourists’ attention.

The empty slabs where houses once stood, the town square now abandoned but for a sign indicating where the pool, post office, and grocery store once stood. Mary Kathleen was officially opened by then-prime minister Robert Menzies and Queensland premier Frank Nicklin in 1958. At the time, it boasted a population of 1,000 living less than 10 kilometres from the town’s driving force — the uranium mine. Now all that is left is memories, the old mine pit, and a bright blue, stunningly gorgeous, and slightly radioactive dam.

In 1981, one year before the mine — and subsequently, the town — was closed, the population of Mary Kathleen was 830. The uranium mine was located only six kilometres from the township, and now tourists with four-wheel-drives are visiting the site, popular for the stunning water shining from the abandoned pit.

PHOTO: Mine site visitors Heeyoung, Paul, Leah, and Irvin travelled from Mount Isa to see the water. (ABC North West Queensland: Kelly Butterworth)
Mary Kathleen was Australia’s first major uranium mine rehabilitation project, completed in 1985 at an approximate cost of $19 million. None of the buildings from the township remain. They were sold and taken to Mount Isa, 30 minutes’ drive away, and Cloncurry (45 minutes away). Instead only their foundations stand around a sign in the old town square featuring a map of what was a bustling town only 30 years ago. Now, it is a popular destination for people wanting the perfect Instagram shot.

Multiple hazards at abandoned mine sites

Gavin Mudd from the school of chemical and environmental engineering at RMIT said tourism spikes at radioactive sites came with a raft of issues.

“We know it’s radioactive — it’s a former uranium mine — but what we also know is that the general levels of that radiation [are] above background levels but they’re not acute.

“They’re not the high levels you would get at a nuclear power reactor.” Locals to the Mount Isa region will tell you the dam was once green, a stark difference to the clear and bright blue it is today. Dr Mudd said changes in the water colour were to be expected due to the varied chemistry in the area.

PHOTO: The Mary Kathleen dam site is radioactive, but still a tourist hotspot. (Supplied: Geo Sarah)
“The weathering of the rocks releases various metals and salts and they give rise to these sorts of colours,” he said.

“We see these sorts of colours at former copper mines and gold mines all over the world.” As for whether or not the area is safe for tourism, Dr Mudd said by keeping your distance and minimising your time spent in the area, tourists should feel safe as long as they did not plan on swimming. “There are risks to skin, risks to ingesting that water, and if you do happen to ingest some water, that may be an issue,” he said. “I wouldn’t describe the risks as acute, but I certainly wouldn’t be swimming in that old mine pit.”

Cheryl Wilson and Steve Kamerling were on their way home to south-east Queensland from Lake Eyre when they saw the sign to Mary Kathleen. Mr Kamerling said he remembered the basic history of the town so they decided to pull in for a look but neither he nor Ms Wilson expected to find the mine pit looking as it does now.

PHOTO: Cheryl Wilson and Steve Kamerling were on the road home from Lake Eyre to Beenleigh when they stopped in. (ABC North West Queensland: Kelly Butterworth)
“We didn’t know what to expect, we thought it would just be a hole in the ground, but with that water in the bottom and the landscape, it’s just amazing,” Mr Kamerling said.

“I never expected the water. When you walk around that corner, it’s incredible,” Ms Wilson added.

For outback tourism company North West Tours, based in Mount Isa, the allure of Mary Kathleen keeps the tourists coming back. Tour guide Philip Cochrane said social media brought a lot of tourists to the region. “I think a lot of the tourists these days have four-wheel-drives and through social media, it’s becoming more well-known as a must-see tourist spot which is quite easy to access with a four-wheel-drive,” he said. “But we have people who have flown into Mount Isa, or don’t have a four-wheel-drive, who are booking in too. “The majority would be the older grey nomads but we do see some younger couples doing the big trip around Australia.” Mr Cochrane said while tourists did question the radioactivity of the site, it was never a deterrent. “There are certainly questions about that [but] I don’t think there’s any real concern,” he said.
Originally published by ABC News. Useful links: Don’t miss another update!
Decipher Mine Rehabilitation Mining
Share on Facebook Share on twitter