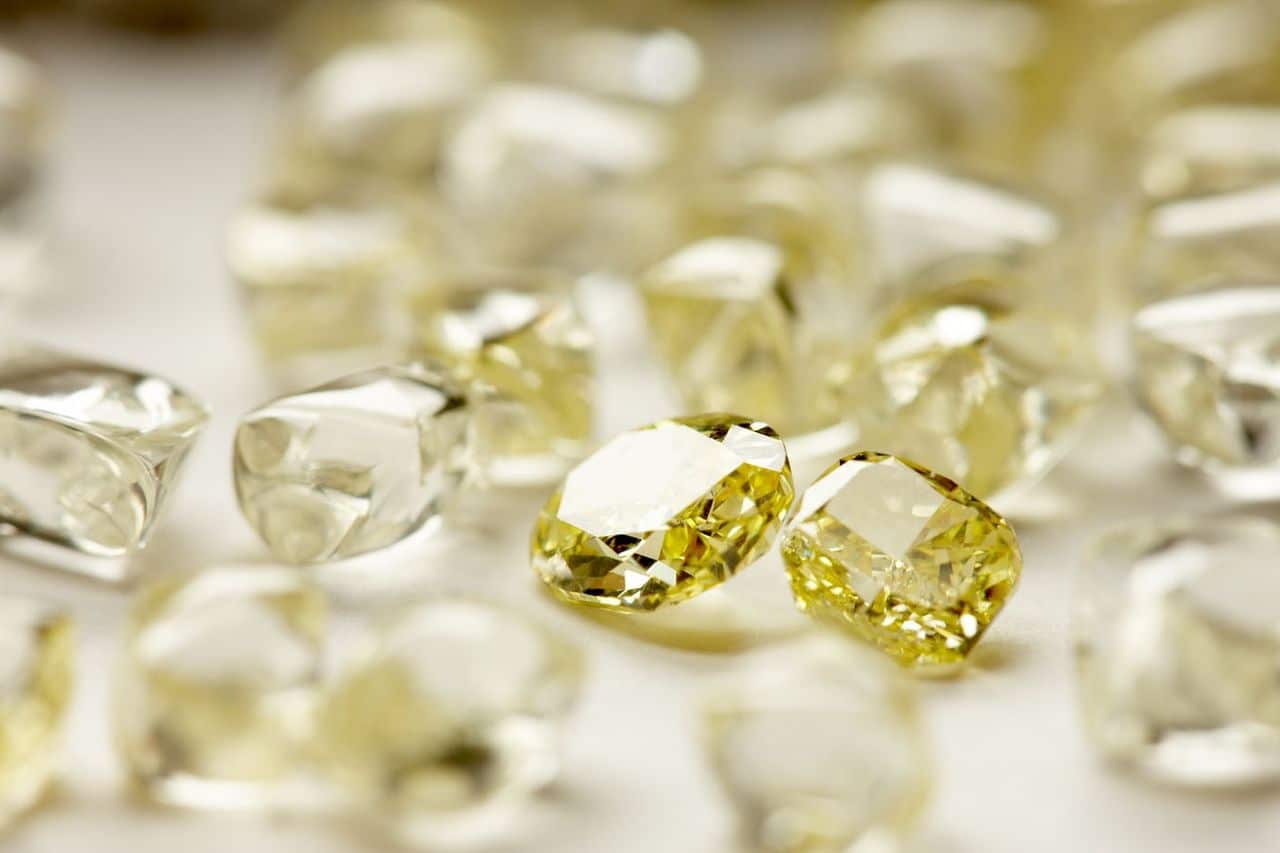 With the looming closure of Rio Tinto’s Argyle diamond mine, this year is set to be a critical turning point for the Australian diamond industry.

The East Kimberley mine, 3,000 kilometres north of Perth, produces more than 90 per cent of Australia’s diamonds and is one of the few known sources of pink diamonds in the world. Although it is not known exactly when Argyle will shut down, Rio Tinto’s current estimates only indicate enough economic reserves to support production through to late 2020. But as one door closes, a new chapter begins; with the mothballed Ellendale mine that once produced half the world’s fancy yellow diamonds, being given a new lease on life.

Last month, the State Government announced Ellendale was a step closer to restarting, after Western Australian explorer Gibb River Diamonds accepted an offer to apply for new tenements at the mine. The company, formally known as POZ Minerals, already holds mining and exploration leases over 40 kilometres of diamond-bearing alluvial channels west of Ellendale, where trial mining is set to begin this year. “This builds on the work we’ve already done in the Kimberley with the Blina Diamond Project, which is right next to the Ellendale leases,” executive chairman Jim Richards said.

“We do feel that with Argyle closing by the end of this year, potentially if things go right for us then we could be Australia’s only diamond producer by that time.”

The Ellendale diamond province has seen many mining ventures come and go since the deposit’s discovery in the mid-1970s. The most recent was embattled miner Kimberley Diamond Company, who once supplied stones to New York’s famous Tiffany and Co. After the company went into administration in 2015, it relinquished its mining lease and environmental liabilities — reportedly up to $40 million — back to the State Government. But with the world’s biggest source of yellow diamonds potentially still in the ground, Mr Richards said the right operator could make Ellendale pay, where others had failed. “We’re looking at things in a very different way to how Kimberley Diamonds did it; it would be a more modest operation which doesn’t require the big plant and machinery,” he said.
“You’re looking at an operation that only involves about 5-10 people to get up and running, not the hundreds that Kimberley Diamonds had [but] that doesn’t mean it can’t be very profitable.”
Mr Richards said advances in ground-penetrating radar technology had allowed them to target high-grade alluvial diamonds in the region with more accuracy than in the past. “The key is finding those fantastic yellow diamonds; they’re a unique stone and they’ve been highly sought after by diamantaires around the world.”

A new era for diamond industry

Mr Richards said Gibb River Diamonds had already started pegging leases at Ellendale and would need to conduct more exploration and consultation with traditional owners before operations could begin. He said one of the biggest challenges for small diamond explorers trying to enter the market was “exorbitant” council rates and the high royalty rate of 7.5 per cent paid to the State Government for diamond production. The Government has spent about $230,000 on rehabilitating the site and making it ready for new operations. India Bore Diamond Holdings, who have been exploring on an adjacent pastoral lease, has also been invited to apply for other tenements at Ellendale. Mines and Petroleum Minister Bill Johnston said he was optimistic renewed investment in the operation could help rejuvenate the Kimberley diamond industry.

“It’s not going to happen overnight, but restarting mining operations at the former Ellendale mine will be a high point in the rejuvenation of diamond exploration and mining in the Kimberley,” he said.

Meanwhile on the other side of Ellendale, Lucapa Diamond Company has been exploring the Brooking Diamond Project, only 50km east of the mothballed mine. Chairman Miles Kennedy has a long history of searching for diamonds, having set up the Ellendale mine almost 30 years ago. He said despite the company making a couple of significant discoveries at Brooking and experiencing record production totalling more than $55 million out of their two flagship mines in Africa last year, Lucapa’s plans to continue exploring in the Kimberley were on hold.

Mr Kennedy said it was a “tough year” for the diamond sector globally. He said disruptions caused to the market by the United States-China Trade War and political unrest in Hong Kong, a significant diamond buying and manufacturing centre, had had a major impact on prices.

“One of the biggest diamond retailers in the world, called Chow Tai Fook, has announced in the last few days they’re closing 20 per cent of their stores in Hong Kong,” he said.

“In terms of exploration in the Kimberley, we probably won’t be doing much this year until such time we can see how the market is going to behave this year.

He said easing tensions between the US and China following trade negotiations this week, could see an uptick in prices in 2020. Mr Kennedy said he still believed the Brooking project near the old Ellendale mine was highly prospective. Lucapa Diamond Company recovered more than 1,100 diamonds from a single drill hole on site at Little Spring Creek in 2018, the second significant discovery made by Lucapa since they began drilling for lamproite.
“The microdiamond counts that we got from the drilling are the highest actually ever seen in Australia,” he said.
“Once we’ve bedded this down and seen how the diamond market is going to behave this year, we will certainly be dusting off our work at Brooking again.”

Will there ever be another Argyle?

Despite the renewed exploration efforts in the Kimberley, there are those who remain sceptical about another diamond mine equalling the success of Argyle. At its peak production, the mine produced a quarter of the world’s diamond supply, and when Argyle shuts down, it’s been estimated global diamond production will drop off by 10 per cent. But the real loss will be the unique source of vivid pink diamonds. Chairman of the Diamond Guild of Australia Michael Neuman said there had been no other mine like Argyle discovered in human history.

“There hasn’t been a new viable diamond mine discovery [in] the last 20 to 30 years and the ones that are currently in production all over the world are likely to become economically unviable in the next 50 years,” he said.

“To my mind, that means its extremely unlikely that another regular source of pinks will ever be found, because the conditions required for the formation of pink diamonds in nature are so freakish.”

Mr Neuman’s family has been in the pink diamond business since the first days of the Argyle mine 40 years ago. Mondial Pink Diamond Atelier is one of the original Argyle Panel members established in order to sell and distribute Argyle pink diamonds, with an exclusive customer base extending all the way to the Sultan of Brunei. Mr Neuman said the closure of Argyle next year would be a huge moment in the diamond industry’s history and an emotional time for his family business.
“One of the things we were always very proud of was that we had these local diamonds we could champion and that people would travel around the world to sample,” he said.
He said he had attended the exclusive Argyle pink diamond tender every year, where diamantaires and collectors from around the globe are invited to place secret bids on these rare gems. Only 1 per cent of Argyle’s production is made of coloured diamonds every year. The tender is made up of a collection of the top 50 or 60 of those stones, some selling for tens of millions of dollars.

Will lab-grown diamonds disrupt the market?

Mr Neuman said Mondial currently held the largest selection of Argyle pinks in the country, and would be in the pink diamond business for years to come. And while the likes of global diamond giant De Beers had started investing in the synthetic diamond sector in recent years, Mr Neuman said it wasn’t a market that offered any value to genuine collectors. “Natural diamonds are formed by forces of nature over up to 3 billion years, these things can be produced in a matter of days in a machine,” he said. “I personally believe the whole synthetic diamond push is to take control of that market. [De Beers] have decided they’re going to do it better, faster and cheaper than anyone else.
“What we’ve seen since they launched their synthetic range of coloured diamonds Lightbox, is the price of synthetic diamonds getting pushed down to about $US800.
“It’s very clever what they’re doing. In affect they’re protecting their interest in natural diamonds by saying this is a completely other product.” The Diamond Guild of Australia does not permit its members to trade synthetic diamonds, and even with the impending closure of Argyle, this is not a stance high-end jewellers are likely to change anytime soon. Originally published by ABC News.


Find out how mine rehabilitation legislation in Australia is changing in our FREE guide.