The nation’s richest man has pegged out vast swathes of land covering 3.6 per cent of Western Australia’s land mass, an area larger than Tasmania and nearly equal to the size of Portugal.

About 91,650 square kilometres of mining exploration licences, close to proposed hydrogen and renewable energy projects, have been applied for by billionaire Andrew Forrest’s company Fortescue or one of its subsidiaries in the Gascoyne, Pilbara and Kimberley regions this year. 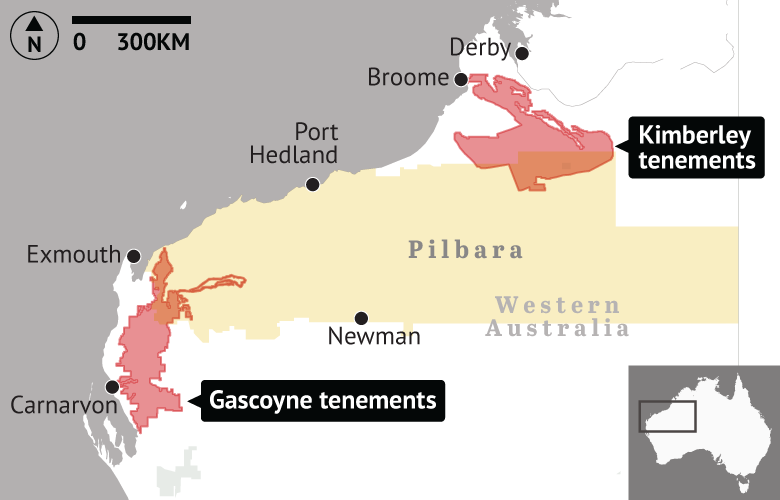 The move comes as the iron miner eyes up 300 gigawatts worth of potential renewable energy projects, including 40 gigawatts in the Pilbara.

By submitting the exploration applications, Fortescue effectively locks out other miners from pursuing mineral projects in the pegged areas.

The majority of licence applications were submitted on July 5 for the Gascoyne-Pilbara, and August 24 in the Kimberley. The cost of renting the more than 150 pending tenements would be greater than $3.7 million, not including minimum annual exploration expenditure required to keep the licences under WA’s ‘use it or lose it’ policy.

Rent and exploration expenditure is not required by the WA Department of Mines, Industry, Regulation and Safety for a licence until after it has been approved, and any objections to an application drags out the whole process.

Several of the Fortescue applications have already been objected to by other Forrest-controlled companies.

Plenty of WA’s north is sunny and prime for solar projects but only the coast gets high enough wind speeds to warrant turbines.

Alinta asset strategy general manager Gary Bryant spoke in June about the difficulty in finding locations for potential wind farms in WA, with the need for a good wind resource in a place which was not near Aboriginal heritage areas and would not be mined or blasted by cyclones.

Fortescue’s Gascoyne tenements stretch hundreds of kilometres, from south of Carnarvon and up to Onslow and join up with miscellaneous mining licence applications on Uaroo Station, owned by the Forrest family, where the mining company flagged in December it could build a wind and solar hub.

Dr Forrest outlined in his Boyer Lecture at the start of the year how he believed green hydrogen, which requires wind and solar energy, could be a $US12 trillion industry and the potential for projects in the Pilbara.

“We aim to start building Australia’s first green steel pilot plant this year, with a commercial plant in the Pilbara, powered entirely by wind and solar, in the next few years,” he said.

“In the Pilbara, Fortescue is designing vast wind and solar farms that can generate over 40 gigawatts of power – more than half of what Australia can make now.”

Fortescue is so far falling well short of its 40-gigawatt Pilbara target with publicly announced solar projects adding up to 0.21 gigawatts.

The company has said it had no timeframe for exploration on its Gascoyne licences but would be entitled to explore for minerals.

Fortescue chief executive Elizabeth Gaines said WA was well-positioned to be at the forefront of the global renewable hydrogen industry.

“At Fortescue Future Industries we are advancing projects in Western Australia to build large-scale renewable energy and green hydrogen production capacity,” she said.

Fortescue was contacted for comment about its intentions behind the pending Kimberley tenements.

Mining licence applications are being made in an environment where there is no freehold land to snap up for projects as WA’s Labor government, which controls both houses of Parliament, explores tenure options and potential legislative changes to enable large-scale renewable infrastructure.

She said the pathway proponents currently took to progress projects was to access a Section 91 licence under the state’s Land Administration Act, allowing industry to undertake solar and wind studies which could underpin investment decisions.

“If Native Title is determined over the site, we expect the application for a license to be supported by a letter of consent from the Native Title holders and support from other interest holders, including pastoralists,” Ms MacTiernan said.

From a Section 91 licence a project could move to a Section 79 exclusive lease if it had proof of viability together with an Indigenous Land User Agreement.

The Asian Renewable Energy Hub has exclusive lease rights for its project while Province recently received a Section 91 licence for a 100 square kilometre area north of Carnarvon.

Province chief executive David Frances said the absence of certainty for green hydrogen land tenure and no comprehensive legislative regime to govern the industry were risks for the sector.

Part of Province’s footprint is over another Forrest family-owned station, Brickhouse, where its exploration licence applications have been objected to in the WA Warden’s Court.

A spokesman for Harvest Road, the Forrest food production arm, said it would continue to exercise its legal rights to object to any exploration lease application it believed may produce adverse impacts to its pastoral operations.

“Rather than constrain potential exploration, consistent with our approach, Harvest Road Group seeks to resolve these matters through land access agreements negotiated by both parties,” he said.

“Regarding the current application, steps towards this negotiated position have already commenced.”

Forrest-run companies such as Forrest and Forrest Pty Ltd and Red Sky Stations Pty Ltd have also lodged objections to some of Fortescue’s miscellaneous and exploration licence applications on Uaroo and Brickhouse.